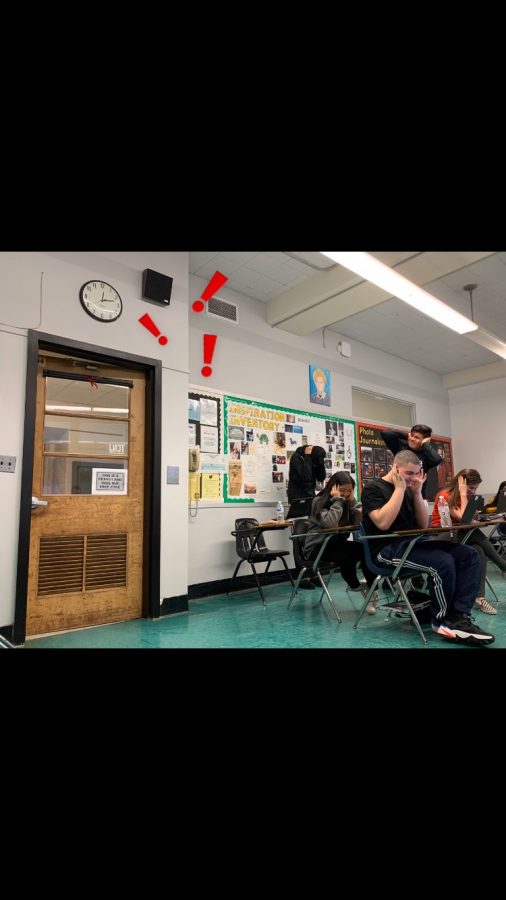 Students clasp their hands over their ears as Ms. Montes loudly runs through the daily announcements. As of recent, Montes was named permanent announcer by the administration.

Beginning in the 2020-2021 school year, science teacher Ms. Montes will be officially taking over the morning announcements. The decision comes from Montes’ chilling drill call over the loudspeaker in late 2019.

It was during Block 1 on September 12 that Ms. Montes called a lock down sending everyone into a panic. The announcement was not only incredibly loud, but incredibly shrill. One could say it happened to be the unintentional audition for her upcoming position.

“Who goes that hard for a lock down drill? A kid in my class literally jumped clear across a table just to get to the wall,” recalls junior Kimberly Ortiz. “Imagine if there was someone who really had to use the bathroom, just to hear that over the loudspeaker. It would have been over for their pants that day.”

While many students, such as Ortiz, found the announcement odd and out of place, the administration has since viewed it in a different light.

Mr. Lottmann, WHS principal, sees it as an amazing opportunity to give both staff and students a daily energy boost as well as get people to actually listen to what could be important information. “There’s no way that people can ignore the morning announcements now. It’ll be so overwhelming that you won’t be able to focus on anything else except Ms. Montes and her very necessary belting,” he said.

Ms. Montes herself is rather keen on the new assignment. Not only that, but she has some ideas of her own to keep students on their toes.

“Doing the morning announcements is a great first step. However, I think we need to go further to keep students engaged throughout the day,” claims Ms. Montes. “I say we arm every faculty member with an airhorn. Whether you’re telling a kid to take out their earbuds or about to stop an altercation, it’ll be way more effective, trust me.”

Upon hearing the news of her new position, some have raised concerns for Montes’ well being. “She’s going to be doing the announcements like that every day? Lordy, I can only imagine the strain on her vocal chords,” expressed choir director Ms. Romero.

While Ms. Montes understands and appreciates the worry, she could not be more elated to begin in September of 2020. She will, however, accept any gifts offered to her of soothing tea and honey, should she need some in the coming school year.

If you want a picture to show with your comment, go get a gravatar.